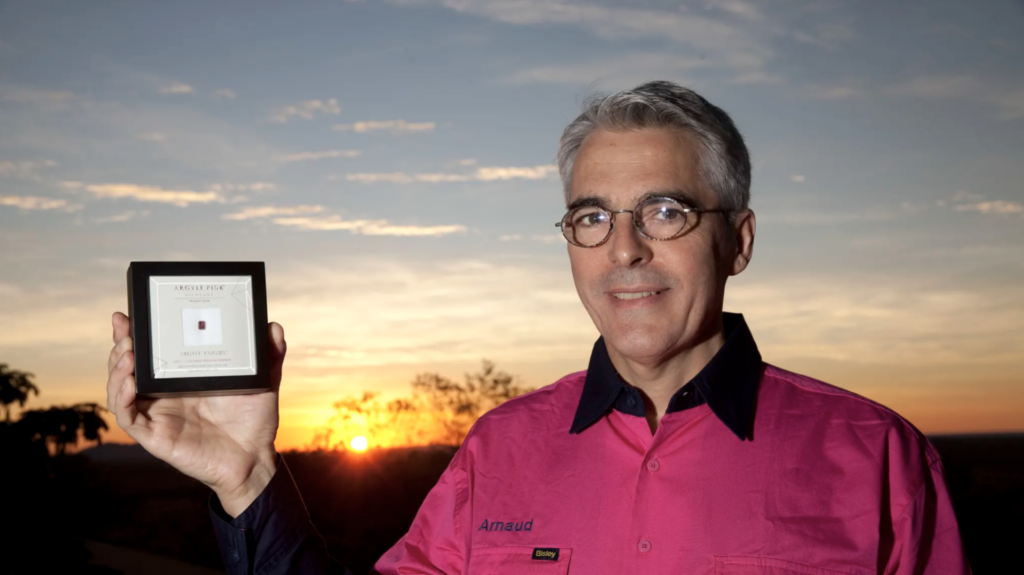 As sun sets on Argyle mine, prices for its last pink and purple diamonds to soar

Coloured Argyle diamonds are famed the world over for their stunning purple, pink and red hues that mirror the cotton-candy East Kimberley skies surrounding the mine at dusk.

With the Argyle diamond mine ore body depleting and closure likely to occur by the end of 2020, 90 per cent of the world’s coloured diamond supply will cease and the industry is expecting their value to explode as a result.

Mine owner Rio Tinto on Friday unveiled its 2019 Argyle diamond tender collection, potentially one of the last tenders to ever be held.

The 64 diamond, 56.28 carat collection includes the most spectacular finds at the mine for the year and will be showcased in Perth, Hong Kong and New York before being auctioned by October.

Rio Tinto Copper and Diamonds chief executive Arnaud Soirat said typically pink diamonds of the best quality such as Argyle’s would fetch several million dollars per carat and the commodity, while notoriously hard to pin down on price, had fared better than the stock market.

“If you look at the evolution of the price over the past 20 years the price has increased by 500 per cent.

“Every year the price increases by a double digit number, if you compare that to the stock market that's significantly higher.”

Anna Cisecki is the executive director at diamond investment firm Australian Diamond Portfolio and said coloured diamonds were the ultimate needles in the haystack yielding long-term returns in excess of 10 per cent per annum.

“As the haystack shuts down, so too will the supply of new rare coloured diamonds to the market; specifically the pink, red, and violet diamonds,” she said.

“The implications for investment are significant.

“Our expectation is that the closure of the Argyle Mine will add upside pressure to the prices of existing rare pink diamonds.

“Nowhere else in the world can you find pink diamonds with such character, depth of colour, and vibrance of tone as those from the Argyle mine.

“Even if a significant new mine were to be discovered in the near future, it would still take a minimum 10 to 15 years from the discovery phase to reach the commercial stage of selling diamonds to consumers.”

Kimberley Fine Diamonds is based in Kununrra and has featured Argyle diamonds in its shops since opening in 1991.

Owner Frauke Bolten-Boshammer said she saw the potential in the pink diamonds from the beginning and has a ring featuring two small specimens valued at $10,000 10 years ago that recently hit $50,000.

“[After the mine closes] the value maybe won’t skyrocket but they will go up and up,” she said.

Diamond arm still shines bright, but not in Oz

The possibility of a new Argyle in Australia is unlikely.

Mr Soirat said there was lots of activity in Canada, but they were not exploring in Australia and hadn’t found any acquisition opportunities.

“No exploration in Australia, not for diamonds. Our team doesn’t think it’s the highest priority,” he said.

“We are always looking actively all over the world but ultimately the rationale in diamonds is exactly the same as any other commodity, it’s value over volume so if you’re thinking in terms of potential mergers and acquisitions, ultimately Rio Tinto [will explore that] if it will create value for the shareholders.”

Rio Tinto isn’t afraid of divestment, as it demonstrated last year by offloading its coal arm, but diamonds look to have some staying power.

Mr Soirat said while diamonds weren’t a big part of the company’s portfolio it was very profitable and mining techniques were similar to copper, which allowed them to experiment.

“If you think value over volume it’s a big tick,” he said.

The future of the mine site is still up in the air with a closure feasibility study currently under way, but Mr Soirat has revealed people are interested and he suggested the camp and airport facilities were attractive prospects in such a beautiful part of the country.

“Look at this pristine environment, it’s an incredibly beautiful environment, there is an airport and there is a good camp so maybe some people want to do something with this,” he said.

“The whole process of dismantling the equipment and cleaning it will take time.

“It’s years before that can happen but already some people have expressed interest in using the site for other purposes.”

Mr Soirat said rehabilitation could take from five to 10 years and while they didn’t have a dollar figure yet, it would be paid for out of Rio Tinto’s $10 billion rehabilitation fund.

“Traditional owners are firmly at the table in terms of what some of the decisions to be put forward to the regulator are in terms of final land form and final land use,” she said.

Many employees of Rio Tinto’s 450-strong Argyle workforce will likely find their way into Rio Tinto’s iron ore business, but the company is also offering to pay for training for career changes and is offering redundancies.