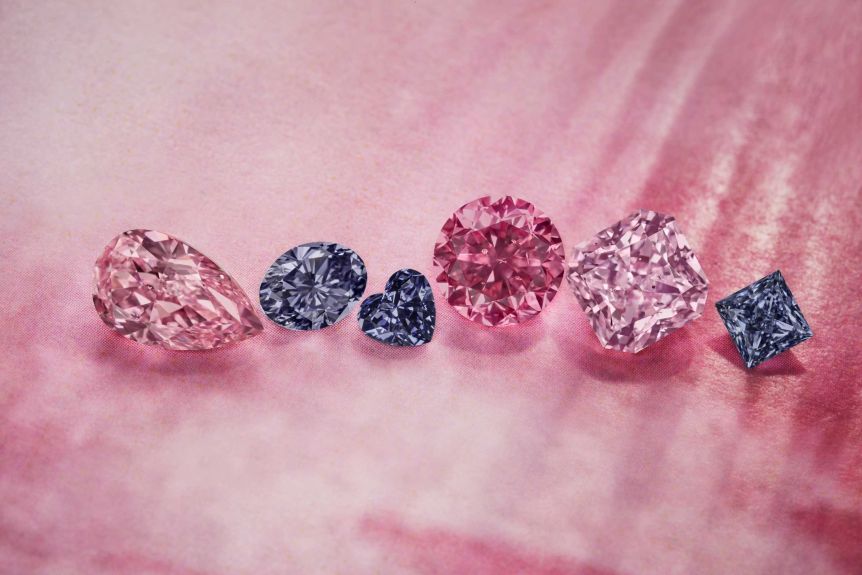 Every year, Frauke Bolten-Boshammer bids against the most powerful diamond connoisseurs in the world for a chance to get hold of some of the rarest and most valuable coloured stones on the planet.

The Kununurra-based owner of Kimberley Fine Diamonds started her outback diamond empire almost 30 years ago in the East Kimberley.

She has also been one of the privileged few invited to attend Rio Tinto's Argyle Pink Diamond Tender, which is considered one of the most exclusive diamond sales in the world.

"I always like to be a bit different and the pink diamonds are different. They are really special," she said. "We can be so proud that we only live one-and-a-half hours drive away from the mine. It's right in our backyard."

Argyle Pink Diamonds are produced at Rio Tinto's Argyle Diamond Mine in the East Kimberley.

The mine, 3,000 kilometres north of Perth, is Australia's only operational diamond mine and is one of the few known sources of pink diamonds in the world.

And the 50-60 stones selected for the yearly tender are even rarer still, equating to less than one tenth of a per cent of the year's production.

In practical terms, the total number of top-quality pink diamonds could be held in the palm of your hand.

Argyle Pink Diamonds marketing manager Marie Chiam said with the looming closure of the mine only months away, competition for the 2020 collection was expected to be fiercer than ever.

"This year's tender is incredibly special, being our second last Argyle Pink Diamond tender in 40 years and it's headlined by some historic diamonds," she said.

"Of special note is the Argyle Eternity. It is the largest fancy, vivid, round, brilliant diamond that we've ever offered at tender which really makes it unfathomably rare."

The 2.24-carat Fancy Vivid Purplish Pink Argyle Eternity is one of 62 diamonds in the 2020 tender titled 'One Lifetime, One Encounter'.

The historic 57.23-carat tender collection was launched virtually this month, to an exclusive group of diamond connoisseurs and luxury jewellery houses.

In addition to the six hero stones carefully selected each year to headline the sale, this year 12 sets of 'Petite Suites' have been also been included in offering for the first time.

"There are 12 sets of miniature diamonds, which are a beautiful representation of the Argyle colour spectrum," Ms Chiam said.

"They've been meticulously crafted over a five-year period, so thousands of hours by our master graders, and are quite simply unrepeatable."

Pinks value on the rise

You need to have deep pockets to afford these rare gems, with the top bids fetching prices into the millions of dollars per carat.

Unlike colourless diamonds, an Argyle Pink Diamond is graded foremost on colour before clarity and cut and its value determined by the intensity.

Over the past 20 years, the value of Argyle Pink Diamonds sold at the tender have appreciated 500 per cent, outperforming all major equity markets.

Ms Chiam said these results reflected the supply of these extremely rare diamonds becoming even more scarce and more valuable.

"Argyle really changed the course of diamond history and has brought to life a palette of colour that the world has never seen," she said. "Argyle produces more than 90 per cent of the world's pink diamonds, so with the impending closure it just heightens the appetite for people to covet, collect and acquire the diamonds."

Bidding for a piece of history

After its online launch, the Pink Diamond Tender collection is set to go on a limited tour around the world due to COVID-19 restrictions this year, with showings limited to Perth, Singapore and Antwerp.

Only 19 Australians are on the exclusive list of collectors who have been invited to place secret bids on the stones before the December deadline.

Kimberley Fine Diamonds manager Helen Thorne said it would be the end of an era for long-term collectors when the tender called its last bids.

"This will only be my second one but it's an honour and it's something that my peers in the industry may never get to see," she said.

"So it's pretty exciting to be a part of history."

Meanwhile, preparations for the Argyle Diamond Mine's closure and rehabilitation have begun, with only enough economic reserves left to support mining through to the end of the year.

Signs of mine slowing down was evident in Rio Tinto's 2020 half yearly results, which reported a 4 per cent decrease in production in comparison to the first half of 2019.

Ms Thorne said there was an increasing awareness among customers that the global supply of pink diamonds was finite.

"All the customers I meet, they simply want something that no one else is going to have and that's the brilliance of Argyle Pink Diamonds," she said. "I like to think that everybody buys one because they love it, but a lot of people do have it in mind that they perhaps will be able to on-sell it one day and have a return on their purchase. There are a lot of people using their self-managed super to make those purchases."

Where to from here?

With almost the entire world's supply of rare pink, red and violet diamonds coming from Argyle, speculation has risen on how the closure of the mine will ultimately affect the industry.

A small quantity of pink diamonds are mined in Brazil and in South Africa, including the almost 19-carat Pink Legacy, which set a new world record price per carat when it sold for almost a whopping $70 million in 2018.

But so far, nowhere else in the world has produced diamonds as vivid as the pinks from the Kimberley.

When the West Australian mine shuts at the end of this year, it has been estimated global diamond production will drop by 10 per cent.

It has been a tough year for the diamond sector globally, with a steep decline in diamond prices due to weaker markets from the global COVID-19 pandemic.

In its mid-year financials, Rio Tinto reported a 39 per cent decrease in overall diamond prices this year across its Argyle and Diavik mine in Canada, which is also set to close in 2025.

But the team at Kimberley Fine Diamonds remains positive for the future of the industry.

"We're in a good position to continue a pink diamond business for a number of years because of Frauke's groundwork," Ms Thorne said.

"It is the end of an era, but it's very exciting to see what's to come."